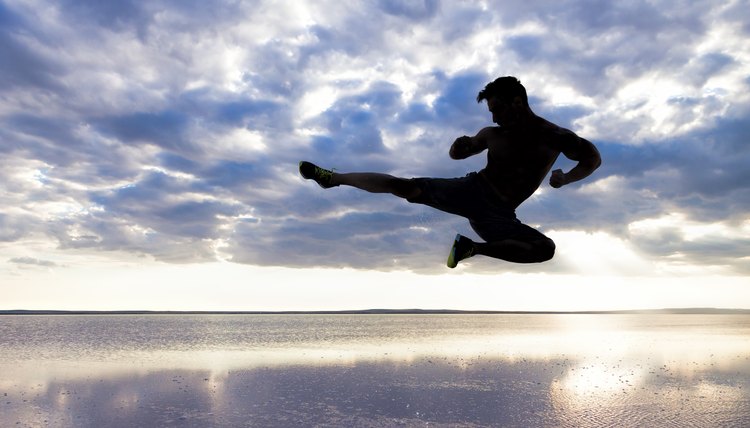 Learning Shaolin Kung Fu is not as simple as practicing punches, kicks and blocks. Monks created much of what is now known as Kung Fu, and they intended to make it a holistic practice. Tending to both mind and body is important when you’re a beginner in Kung Fu. The physical practice influences your mental growth, and vice versa.

Originally developed as an all-encompassing philosophy, Kung Fu teaches physical, mental and even medical techniques. Shaolin Kung Fu is the merging of older Kung Fu techniques with Shaolin Boxing techniques, which were practiced by Shaolin monks in China.

The Chinese influence on Kung Fu helped mold it into a sport called Wu Shu. The sport was developed during the Qing Dynasty, according to a 2013 study published in Social and Behavioral Sciences. During that time period, Chinese citizens couldn’t practice combative martial arts, like traditional Kung Fu, so they had to disguise it as the competitive sport Wu Shu.

It’s interesting that Kung Fu morphed into a sport, because practicing the art for competitive purposes is actually against its core philosophy. The goal of Kung Fu is not to overcome one’s opponent, but to overcome oneself.

Competition with the self is encouraged, which is practiced through meditation and the physical practice of Kung Fu. Mental toughness is a cornerstone of Kung Fu, which you’ll quickly realize once you start training. For beginners, one of the first tasks is to learn the horse stance, which is essentially a wide-stance squat position.

The horse stance is one of the first things you learn in Kung Fu. It’s meant to test a beginner’s mental fortitude more than anything. To do a horse stance, set your feet wider than shoulder-width apart. Point your toes out slightly, then squat down. Your knees should be bent slightly higher than 90 degrees.

Some Kung Fu teachers ask their students to hold this position for up to an hour before they begin formal training, to ensure that they have the mental fortitude to practice Kung Fu. While that might be extreme for the average beginner, getting comfortable with this position will pay off in the long run because there are many Kung Fu movements performed from this position.

In Kung Fu, you’ll learn to string together various stances, punches, blocks and kicks as you get more advanced. In order to combine everything you learn, you have to break down the stances into individual parts and perfect them.

There are a few basic stances that you’ll see often. The forward stance looks like a lateral lunge where you lean on one leg. Cat stance is where you lean on your back leg with the knee bent, bring one hand up to your chest, and hold the other above your head with your arm straight.

Twist stance is rather complex. You have to cross one leg over the other and squat down. Crane stance requires balance because you have to stand on one leg and hold the other one in the air with your knee bent.

After you learn basic stances, you can practice strikes and blocks. One of the simplest is the punch-block-punch. From either a standing position or horse stance, punch out straight with one arm until your elbow is straight and knuckles face up. Then, flip your hand over and pull your arm back slightly. This is the block.

After you block, punch the arm straight out again. This move combines offense and defense. Start slow and, over time, you’ll be able to increase speed while keeping your technique clean.

The basic kicks in Kung Fu are similar to most other martial arts that use kicks. The front kick is the most basic, where you simply thrust your leg forward into the opponent, hitting them with the bottom of your foot.

Side kicks are similar to front kicks, but you face perpendicular to the object you want to strike, instead of facing towards it. Front and side kicks are very abbreviated strikes with the power to stop an advancing opponent.

For a roundhouse kick, you actually turn your body in the direction you’re kicking and strike your opponent with your shin or foot. This is a more powerful strike than the front or side kick because you have more time to build momentum.